Chicago Agent Magazine reports on the Bust to Boom Developer Panel event held by the Home Builders Association of Greater Chicago
Special thanks to our sponsors and speakers!

Top Real Estate Developers Weigh In on the Chicago Housing Market
Four kingpins of multiunit housing in Chicago gathered to reflect and vent for the benefit of an audience of industry movers.
BY IAN SPULA
PUBLISHED TODAY AT 11:30 A.M. 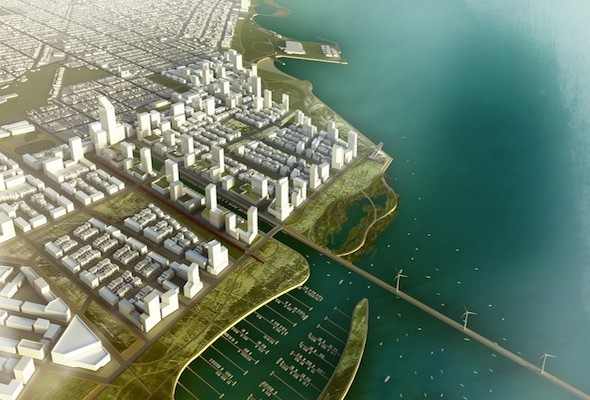 A panel of real estate developers convened Wednesday morning to share gut reactions on the Chicago market’s opportunities and challenges assembled by the Homebuilder’s Association of Greater Chicago (HBAGC). The industry crowd let the four speak their mind on a range of topics, namely the housing recovery, rental vs. condo construction, affordable housing, and the presidential library. They were unified in most areas, particularly (and predictably) in their distrust of the new Affordable Requirements Ordinance (ARO) which requires developments of 10 or more units to set aside 10 percent as “affordable.”

Works from this group in planning or approval stages—those they could air—include a 400+ unit apartment project in Pilsen, a 52-unit boutique condo building cuddling up to Trump Tower, another 350 apartments at Roosevelt Collection, and the Jeanne Gang-designed 87-story Wanda Tower with a five-star hotel and 350 condos.

Here are the highlights from the talk.

On Rahm Emanuel:
DAN: Is this place taped?

ALAN: What’s the next question?

DAN: I’d say he’s really good for the city. It doesn’t mean he’s done everything right but I think we need a tough person like him in a lot of levels of government.

On the next hot neighborhood:
RANDY: Well, the hole in the donut is the Cabrini Green area…I mean, NOCA.

On housing recovery:
ALAN: On the condo side we’re probably only in the second inning of a nine-inning game. We only started building condos again in 2010, 2011, so I think we have a long way to go. Prices have recovered, by and large, to pre-2008 values, but they have yet to push higher. And the projects are small. I envision the 40-, 50-, 60-unit projects continuing for a while; 300-unit condo developments are no longer the norm. Once we get some pent-up demand we’ll start to see larger stuff.

What we’re not seeing in the market is millennials. They’re renting, and the experts on the rental market will tell you the demographics are much different than 10 or 15 years ago. Buyers are skewing a little older and have more income and bigger down payments for bigger condo units.

RANDY: There’s a lot of product coming into the

[multiunit] rental market but with job growth and the tech industry and the youngest millennials at 18 years old, there’s a large pool. That’s a long [potential] lifespan in renting. At E2 [in Evanston], half-leased in eight weeks, the average age is 35 years old and the average income is $200,000. As millennials have gotten older, some have moved from one of our towers to another, including those who are tired of the city and are looking at E2. They really like the flexibility of renting. Older people facing property taxes are also considering renting at places with a lot of amenities and services.

DAN: I totally agree with Randy. You’re not just getting an apartment building anymore. You’re getting a pool, basketball court, and access to high-end services. People talk “trends.” In my experience we like to sit in our offices and look at these wavy lines. The real estate business turns on a dime. Does anybody remember preparing for January 9, 2008? No, of course not. And that’s what concerns me about all of this. Nonetheless, you have to move ahead with a positive viewpoint. I think Lincoln Park is ripe for new rentals and condominiums and we’re in the strike zone for what the product should be (with the delayed Children’s Memorial Hospital redevelopment). Lincoln Park doesn’t really have a center, so we’re hoping our project becomes a public space but we might have to change on a dime, from rentals to condos or visa-versa. It’s about minimizing your losses. You’re always hoping to maximize gains but it’s equally the other way.

ALAN: There’s no question the percentage of homeownership has declined, but there still is a market and there will be a time when entry-level buyers come back. There’s increasingly an imbalance between cost of renting and cost of owning. Your beautiful apartments are well over $3 a square foot (monthly rent/square foot). It’s actually less expensive in many situations to own than to rent.

On the new Affordable Requirements Ordinance:
ALAN: It’ll be interesting to see if the ARO spurs any development in far out neighborhoods. There’s a provision in there that allows for what’s called linked development, which means in certain circumstances—if you’re building a high-rise downtown or in Lincoln Park—instead of putting the affordable housing on site, the ordinance will let you build it within a two mile radius or, in some cases, anywhere within the city. As usual there’s politics in Chicago, and I don’t know how difficult it will be to use this provision ward to ward.

I was on the city’s task force for the ordinance—twenty-seven members and only two from the development community. So the deck was stacked against us. We got some changes made, but I’m very concerned about the steep rise in fees and the requirement that you have to build the housing onsite or offsite and can’t buy out of it. Personally I’m working with pieces of property that don’t need rezoning, some that I would have rezoned in the past for more units but won’t now to avoid triggering the affordable requirement. The city may not see the extra revenue they’re counting on because we’re going to be picking over properties that aren’t subject to the ARO. They should be incentivizing affordable housing construction through real estate taxes like in New York.

DAN: The problem with paying into a fund is that the government is the builder. Their record with subsidized housing is they’ll build it wherever they like but won’t pair it with quality schools or playgrounds. Making us, as developers, build affordable units in Lincoln Park or the like is a great idea, but they should disband the CHA and government departments that administer the funds. There’s not a city in North America where the government built successful affordable housing. The notion of 10 or 15 families at a time being put in a safe environment with good schools is definitely the right idea, just not when done by the government.

JOEL: Everyone’s wondering what can be done to change the ordinance, but on an immediate basis what do you have to do? If it’s a rental building, increase rents to incorporate the costs. If you’re building condo you’re going to have to push up prices. And what will lenders say if you haven’t absorbed the fees to the point where it’s going to be assessed?

On the South Side:
DAN: I’m not sermonizing but it always strikes me how in groups like this the complexion in the room is pretty consistent. We have a whole South Side of the city and we have to figure out how to move the ball that way. I think it’s kind of neat that Hyde Park is getting a Whole Foods and new apartments because we have to steer some investment down there. The south lakefront is gorgeous and it’s a part of our city. Everyone’s talking North Side, North Side, North Side. I’d like to put in a plug for South Side.

They’re putting the presidential library in the wrong spot. You’re not going to see it in the middle of Jackson or Washington Parks. Now this is sermonizing: Walt Disney built Disneyland in Anaheim because he had a whole bunch of free land for it to grow into. Then he said he was going to build one on the East Coast and everybody thought Philadelphia, Boston, New York. He built on a swamp in Orlando. Why? So that he’d have thousands of acres for expansion. I wish to hell [the library] was coming to the Steel Works site because it’d be on the lake without being in parkland and you’d have moved the radius of economic opportunity in this city nine miles south [of the Loop]. It’s sort of blow for our development. It is going to happen, but if the library was there we could go down tomorrow and start building stuff. We’d look like geniuses.

RANDY: JDL is on the South Side [in the South Loop]. They’re trying to put more apartments there. And AMLI [South Loop] has been really successful.

About the Author: Chantel Beauregard

I am the Founder and Creative Director of Brandit360 an award-winning boutique design agency that designs web and print communications for forward-thinking clients to build and enhance brands that engage consumers and deliver results. I am also the publisher and editor of the award-winning Greater Chicago Building News, the official publication of the Home Builders Association of Greater Chicago.
Toggle Sliding Bar Area